Just over a year ago, KA told the story of Jonas and the company Simplify AB.

The company was sentenced in district court for unpaid salaries and had its license for providing personal assistance withdrawn.

However, since then, the problems have remained.

Today, Jonas is a so-called “assistance employer”. This is a way for individuals with assistance compensation to employ their own assistants without having to form a company.

KA has met with five personal assistants who are, or have been, employed by Jonas.

Only one of these five assistants has been paid for their work. The assistants tell KA that they have been forced to hand their private cell phones over to Jonas when their shifts start, that he has cameras installed in his apartment, that he activates his personal alarm each time he sees them heading towards the bathroom to use the toilet, that they don’t get any breaks – not even to eat – and that they are not allowed to talk to each other. The assistants also describe offensive behaviour such as insults and fits of rage.
– It’s a reign of terror. I used to cry every day on my way home from work. He often makes up unnecessary, humiliating tasks that you must perform, making you feel worthless. It’s just like being bullied, says one of the assistants.

Another assistant shows us a contract that Jonas has made her sign, which makes it possible for him to cut 3,000–4,000 SEK from her salary if she shouldn’t show up for work due to illness. Each month, about 10–15 new assistants start working for Jonas, according to one of the assistants we meet with. Many of these are people that haven’t been living in Sweden for very long. Most of them stop showing up after one or a few shifts.

In his recruitment ads, Jonas says he is looking for staff for an assistant company he calls FA Assistans. However, this is just a cover-up. There is no such company registered at the Swedish Companies Registration Office (Bolagsverket). It isn’t likely that he would be permitted a license to conduct an assistance business again. Last year he also applied for F-tax at the Swedish Tax Agency (Skatteverket), but the application was denied, probably due to the way he has been conducting his former companies.

– The Swedish system is like a paradise for people like him. He’s smart enough to find the loopholes and use them,” says one of the five personal assistants, all of whom want to remain anonymous.

KA can also reveal that Jonas doesn’t just refuse to pay salaries, he also hasn’t paid enough payroll taxes for his employees. The exact amount of money he receives from the Swedish Social Insurance Agency (Försäkringskassan) is classified information, but he owes the Swedish Tax Agency (Skatteverket) 275 316 swedish kronor, primarily for unpaid payroll taxes. Almost the entire debt has been transferred to the Swedish Enforcement Authority (Kronofogden).

So far, three of Jonas’s former assistants that he employed after the Simplify period have sued him for unpaid salaries, with assistance from legal bureau LO-TCO Rättsskydd AB. According to The Swedish Municipal Workers’ Union, Kommunal, there are several additional cases where their members haven’t been paid.

In the case of the three assistants that have sued Jonas, the unpaid salaries, accrued vacation pay and damages amount to approximately  55 000 swedish kronor in total. If he is found guilty, he won’t be able to avoid having to pay, unlike what happened last time.

When his company Simplify was sentenced to pay approximately half a million swedish kronor in unpaid salaries, plus court costs and interest, the tax payers of Sweden were the ones who ended up paying. Jonas’s company was declared bankrupt and the so-called wage guarantee paid for what his company owed the assistants – or at least a part of it.

The five assistants want to warn others of working for Jonas, who, as mentioned above, now conducts his assistance business under the name of FA Assistans.

– It isn’t fair, especially considering the amount of work we have put in for him. We have given him 100 percent of ourselves, and he doesn`t even pay salaries. It is crazy, I don’t understand how he can live with himself, doing what he does, treating people like shit,” says one of them.

The Swedish Social Insurance Agency (Försäkringskassan) can’t comment on the particular case, as it would violate Jonas’s privacy. However, it isn’t possible to take away someone’s rights to be an assistant employer based on the fact that they are mismanaging their finances or treating their employees badly.

– We can’t stop anyone from being an assistant employer. Our job is to consider people’s eligibility for assistance compensation, says Birgit Lacis, organisational developer at the Swedish Social Insurance Agency (Försäkringskassan).

– These are the rules. We don’t have a mandate to monitor how people are conducting themselves.

So, that means you are free to behave in any way you please towards your assistants and even use the assistance compensation for other purposes than what it is intended for – i.e. paying salaries?

– I wouldn’t say that; of course, the money should be used for what it is intended for. We can question whether the insured person really has had the expenses they state, says Birgit Lacis.

So – in which ways does the Swedish Social Insurance Agency (Försäkringskassan) check up on assistant employers? Every six months, the assistant employer needs to report their costs to the agency and state how big a part of these costs have been used for salaries and other expenses respectively. It is possible to give false information in this report.

Birgit Lacis says that she can’t comment on the checks on whether the reported costs have been high enough, since she can’t go into specifics about the particular case.

Kommunal has informed the Social Insurance Agency (Försäkringskassan) about the deficiencies on several occasions, according to Margaretha Johansson, ombudsman at Kommunal.

But as mentioned, the personal assistants’ situation isn’t considered by the Social Insurance Agency (Försäkringskassan). The Work Environment Act applies to assistant employers as well, but you aren’t required to comply with it in order to be allowed to function as an assistant employer. If one of Kommunal’s members is employed at the workplace in question, the regional safety representative can write a so-called 6.6a report, i.e. a request for the Swedish Work Environment Authority (Arbetsmiljöverket) to take action.

It is also possible for employees to appoint their own safety representatives who aren’t connected to the union, and request actions from the Work Environment Authority (Arbetsmiljöverket) that way instead.

If there aren’t any members of Kommunal employed at the workplace, the regional safety representative can’t write a 6.6a report.

Kommunal has now asked the union’s lawyers at legal bureau LO-TCO Rättsskydd to conduct a quick investigation to find out if anything can be done legally in order to stop Jonas.
We have contacted Jonas twice via e-mail to give him the opportunity to respond to and comment on the contents of this story, but he hasn’t replied.

Footnote: The name “Jonas” is a pseudonym 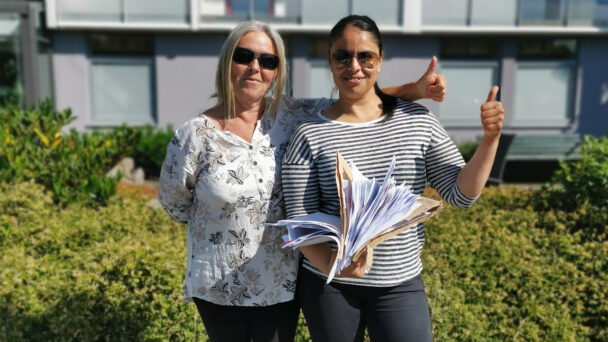